We know you’ve been following our exposés about Flood Control Asia RS (FCA) flood barriers since we first got in touch with you. But, we have to tell you something you haven’t heard from us yet.

Everything we told you since our first exposé can be compared to pep talk. Chalk talk. Pure “cheerleading”.

Come to think of it, we discussed what floodwater pressure is, what anchor plates are, and how back braces work. We simply discussed components that other flood barriers do not have.

At the end of the day, we haven’t told you anything crucial about the flood barriers.

Now, for the first time, we will unmask the (REAL) flood barriers before you. We will show you what the flood barriers are made of, and what makes them the best among the rest.

No rust can bring them down.

It’s up to you to give your own definition, but, no matter what, the FCA flood barriers are invulnerable to all sorts of corrosion. 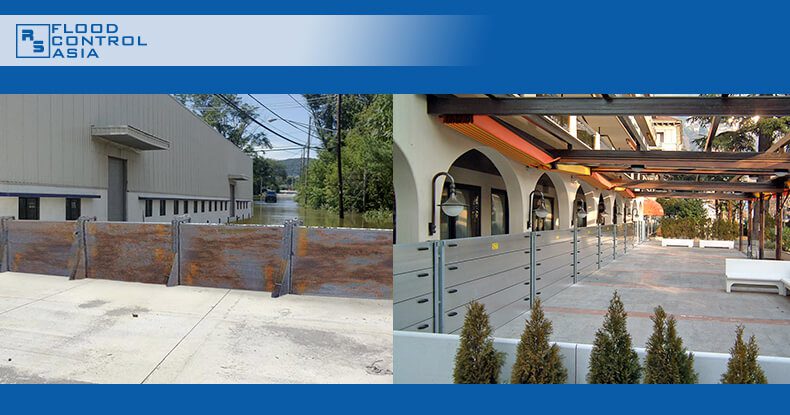 All RS flood barriers are rust- and corrosion-proof since they are all made of aluminum.

What makes them corrosion-resistant?

The FCA flood barriers is a complex assemblage of many basic parts. Yet, the most common part is the barrier itself, which is made of aluminum.

Aluminum doesn’t rust like plain iron. Anyone familiar with basic Chemistry can understand why this is so.

Rust forms when water and oxygen (or simply put, air) reacts with iron. Without active interaction between these two, rust cannot be formed.

In the case of aluminum, it has a very thin layer that protects it from corrosion. BBC’s science page offers an explanation that is as simple as ABC.

Aluminum is coated with a natural layer of aluminum oxide. Thus, water and oxygen DOES NOT come in contact with the metal itself, making it invulnerable to rust.

The FCA flood barriers are made exactly from such material — aluminum. Thus, it is not only resistant to rust, it is resistant to all kinds of stain. The next day after a devastating flood, all you need to do is simply wipe off every dirt that got stuck on your flood barrier’s surface.

The First Line of Defense: HDG

Other than the barriers, our flood control system has other significant components — the side channels, middle posts, anchor plates, ground beams, and compression clamps to name a few.

These, too, undergo a thorough and scientific process that make them resistant to all forms of corrosion.

Now, this process is something that other flood barriers lack. FCA can proudly claim that we are the only one doing the hot-dipped galvanization (HDG). 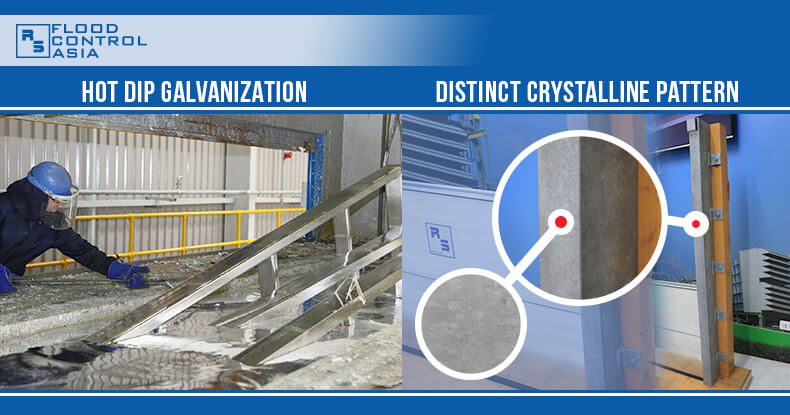 The American Galvanizers Association (AGA) describes the process of hot-dipped galvanization as soaking the steel in a hot, molten zinc, which is exactly the reason why it’s called hot-dipped.

Once soaked in zinc, the molten solution covers the entire steel, acting as a protective coat around it. This protective coat shields the steel from all sorts of corrosive chemicals.

AGA recommends the process of hot-dipping to zinc, since it is the most efficient method of protecting metals from corrosion.

What is the proof that we’re really dipping the flood barriers’ parts in zinc?

Take a closer look on the flood barriers’ side channels, middle posts, and compression clamps. You can notice a crystalline pattern on the steel’s surface. Such is the mark of a hot-dip galvanized material. The crystalline patterns are actually the zinc coating which has solidified over the steel.

You know that we don’t take risks. We are not contented with the mere process of hot-dipped galvanization. We took a second step up of the defense line with the powder coat in hand.

After dipping the components in molten zinc, we spray them with a compounded powder coating. The Powder Coating Institute (PCI) of North America offers an overview of what we exactly do: 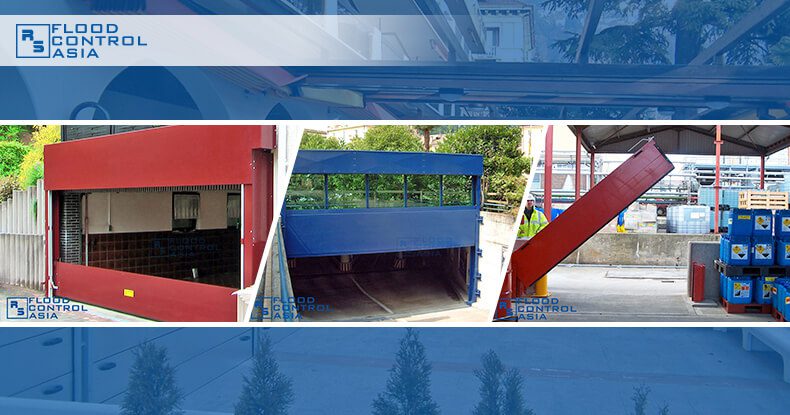 RS flood barriers are all painted through powder coating technology, which enhances the barriers’ aesthetics while protecting them from rust.

Liquid paints peel off when affected by catalysts such as water and heat. Powder coating is designed to last and protect the steel. It does not peel off when scratched, nor does it dissolve when showered with aggressive substances like acid rain.

Most importantly, because powder coating makes the steel ultra-waterproof, our flood barrier components have an additional protection from corrosion.

Such additional protective layer is important, since the flood barriers are made to be exposed to all sorts of elements. Powder coating is one of the numerous “secret” protective measures that only FCA does.

The flood barrier components that are powder coated are the side channels, middle posts, and compression clamps.

You might think that we’re busy protecting our stuff from rust but not from shocks.

In our previous exposés, we told you how our anchor plates, ground beams, and back braces function as ultra-durable frames that resist shocks from rushing floodwater and debris.

On a closer look, these anchor plates are fortified by another secret protective measure — friction welding. 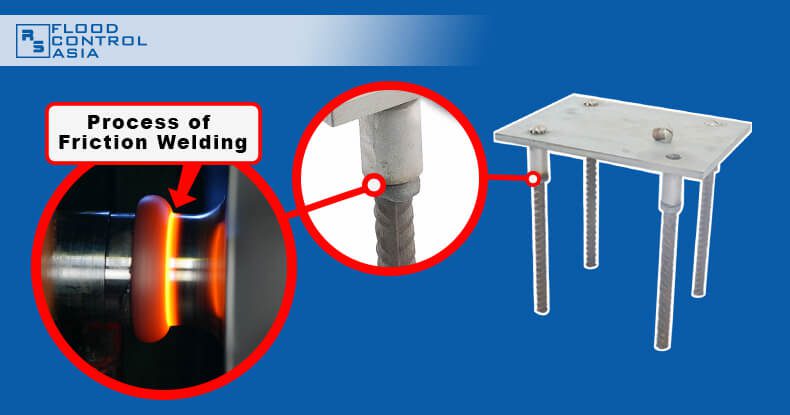 Friction welding renders a much stronger fusion of two components (in contrast to the conventional process of welding).

The anchor sleeves (screws) used to fasten the anchor plates to the ground are made through friction welding. This process makes the screws a lot more durable than those produced through ordinary welding.

How does friction welding works and how does it strengthen our stuff?

Because friction welding enables metal fusion, the outcome is a single metal, not two metals that are bonded with each other.

At the end of the day, what we’re looking for are leak-free flood barriers.

Modesty aside, our flood barriers are 100% leak-free, and we owe it to the component that blocks unwanted floodwater with so much power — the rubber seals. 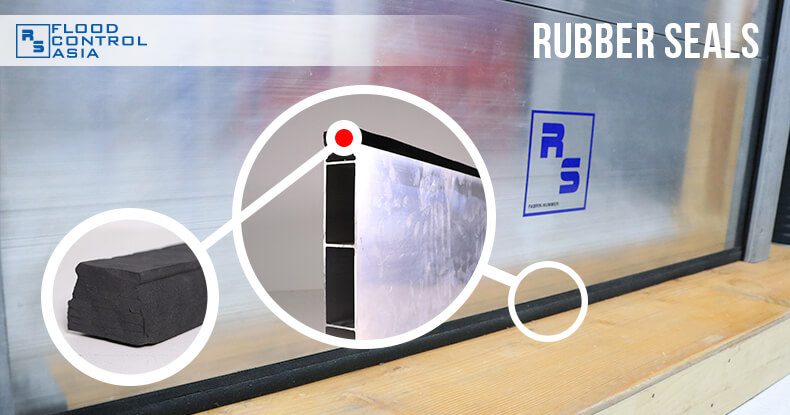 EPDM gaskets can resist any destructive substance that will come in contact with it.

Our EPDM rubber makes the flood barriers free of any leak. Aside from that, the rubber itself is resistant to heat, extreme weather, and even atmospheric hazard such as ozone!

An EPDM rubber is an excellent insulator as well. Heat and even electric currents cannot bring significant damage on it and on the section of the flood barrier where it is attached.

We successfully unmasked the flood barriers for you!

Stripping it of all its gizmos, the flood barriers are proven to be corrosion-resistant, shock and force-resistant, chemical resistant, and leak-free.

What else are you waiting for? No flood control system exhibits all these amazing properties like ours.

If you’re not convinced yet, no one (or nothing) can convince you because the rest of the flood barriers in the market are not as reliable as FCA’s.

Bring this flood barriers to your homes and make your lives more comfortable, more secure, and more successful than before!